And here's how to murder another great socialist anthem... These guys are apparently serious Chinese alternativos but — dear me ...

Posted by Paul Anderson at 23:40 No comments:

This has more to do with Italian football hooliganism than politics, but it's impressive all the same:

Posted by Paul Anderson at 00:16 No comments:

I'm afraid I almost agree with Harry Barnes, a former Labour MP and one of the people that might just have backed the man 20 years ago:


Michael Meacher's decision to stand for the leadership of the Labour Party and thus for the Prime Minister's crown is an unmitigated disaster.

He is yesterday's man, having stood for the deputy leadership 23 years ago in the heyday of a long departed Bennism...

What we need is a left-leaning candidate who will offer a sensible critique of New Labourism, whilst being serious about troop withdrawals and will adopt a Labourite platform which won't frighten the birds...

The alternative to Gordon and John McDonnell should be Peter Hain. He has at least made noises in Government to show that he isn't in tune with the general thrust of New Labour.

My only disagreement is that I'd go for Charles Clarke as challenger of choice. Whatever, Gordon needs to make it clear he wants a serious contest that will not exclude the loser from a senior job in cabinet. Meacher and McDonnell are jokes.
Posted by Paul Anderson at 22:51 No comments:

There's an absolutely brilliant radio programme on the role of Rupert Murdoch in British politics by Steve Richards here.
Posted by Paul Anderson at 00:20 No comments: 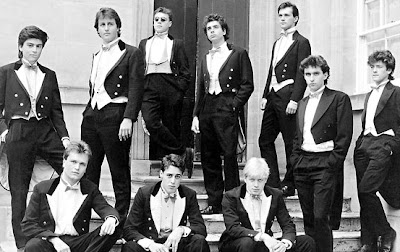 Posted by Paul Anderson at 10:35 No comments:

OK, let's get serious again. I've now read just about every review of Nick Cohen's What's Left? and I'm astonished at how few of them get what the book is about.

It's not a defence of his position on the war in Iraq, and it's not an assault on the whole of the left by a renegade. Nor does it pretend to be a piece of cutting-edge original research or scholarship, contrary to Stuart A's fisking.

It's a polemic by a democratic leftist who watched in mounting frustration and disbelief as the democratic left around him screwed up by tolerating the intolerable and excusing the inexcusable.

What started him off was the refusal of a large section of the democratic left to dissociate itself publicly from (mainly Leninist) apologists for the intolerable and the inexcusable in the wake of 9/11 – lest we forget, indiscriminate mass murder in New York and Washington DC. He then found much the same phenomenon in the anti-war movement of 2002-03, in the left's response to 7/7 and in the left's continuing obsession – on the whole – with banging on about whether invading Iraq was right, oblivious to the actual situation in Iraq. And, boy, do his leftist critics prove him right.

1. Not one left critical review of Cohen has admitted that he's got a point when it comes to the disgraceful excuses for Islamist terror put out in the wake of 9/11 and 7/7 by the New Statesman, the Guardian and others.

2. Not one has accepted that it was at best moronic for anti-war democratic leftists to acquiesce in the Socialist Workers Party, George Galloway and a reactionary Islamist pressure group – all of them de facto revolutionary defeatists when it came to the war, and thus not anti-war but protagonists of Saddam – appointing themselves as the leadership of the anti-war movement in 2002-03.

3. And not one has even engaged seriously with Cohen's argument that, regardless of what you thought about the rights and wrongs of the war, what should matter for the left now, with Saddam overthrown and Iraq on the verge of civil war, is how to prevent a sectarian bloodbath there – not continuing a self-indulgent debate about the rights and wrongs of the decision to invade.

As I've said before, though the caveat means less and less as time goes by, I disagree with Cohen about the war. But the left consensus – not just the Stalinists and Trotskyists and Islamist apologists – is as putrid as he describes it, if not worse.
Posted by Paul Anderson at 20:03 No comments:

I have just set up a LiveJournal account. After submitting an entry on my interests, I received the following error message:


Sorry, you have listed an interest with 7 words. Each interest has a limit of 4 words. Any changes you made to your interests were not saved. Go back and remove, or modify "sex and drugs and rock and roll".

Posted by Paul Anderson at 15:39 No comments:

Now fully recovered from the moderate excess of last night, but full of remorse. I should never have said to Peter Oborne as he left: "So you're straight off to jump in the Thames, I suppose." And I should never have told Oliver Kamm that close-up his hairpiece looks almost real. At least they both smiled. Sorry.
Posted by Paul Anderson at 14:49 No comments:

I'm just home from a launch party upstairs in a West End boozer for Nick Cohen's What's Left?, one of the best bashes I've been to in years. I met Norm and Pooter Geek for the first time and David Aaronovitch for the first time in 20 years. I touched base with Denis MacShane and Joan Smith and Gary Kent -- where have you been darlings? -- said hello to Martin Bright and Bill Keegan and Paulie, chewed some cud with the crew from Little Atoms, and flirted with ... not telling. And then there were the Tribune mob and the atheists. It was lovely. There's nothing like a party. Regrets come tomorrow.
Posted by Paul Anderson at 00:59 No comments: