When was a book last published that was a real game-changer for the left in Britain? The 2004 Liberal Democrat Orange Book, edited by David Laws and Paul Marshall, certainly signalled to anyone who was awake that the up-and-coming Lib Dem generation was ideologically at odds with the social-democratic centre-leftists who had dominated their party since its birth in 1987. But that was more an announcement of impending defection from social democracy than a contribution to its cause.

Nick Cohen’s What’s Left?, published in 2007, was seen the same way (wrongly) for its rip-roaring denunciation of the left’s failure to face up to radical Islamism and dictators in the developing world. And going back further, there was The Blair Revolution, by Phillip Gould and Peter Mandelson, first published in 1996, the nearest thing there was to a coherent statement of the New Labour case (which isn’t saying a lot), and before that Will Hutton’s The State We’re In, an improbable best-seller that caught a pro-Europe social democratic mood when it came out in 1995. It’s now available at all good Oxfam shops, a sad reminder of what Labour could have done in government but didn’t.

And, well, that’s it for the past 20 years. It’s not that there haven’t been good left-wing political books published – just that none of the vision-thing left efforts have had any lasting impact. All those collections of earnest essays put out by Demos, the IPPR, the Fabians and the rest are not even on the shelves in Oxfam, though if you’re lucky you can pick them up at the Samaritans.

But I have a feeling that the Purple Book, the collection put out by Labour’s “modernisers” last week, will not be on even the Samaritans’ shelves in 10 years’ time.

It’s not without its strengths. The opinion polling on which most of its contributors base their efforts is as almost certainly better than Mark Abrams’s after the 1959 general election, which convinced Hugh Gaitskell to try to abandon Clause Four of the Labour constitution and Mirror Group to turn the Daily Herald into the Sun. The voters, polled late last year, don’t think that the state has done them proud. After 13 years of Labour in power, the electorate is concerned about waste in public spending above all else.

Which isn't really fair on the last Labour government. It's true that it presided over some disastrous public-spending excesses – most notoriously a raft of IT projects that went way over budget and never worked properly and various ludicrous defence procurement deals. But until the banking crash of 2008, it didn't seem to most observers that it had overspent wildly. As Ed Balls said in an impressive speech on Monday, although Labour had woefully underestimated the level of risk to which the world's banks had exposed themselves, the 2008 crisis was not the product of increasing public spending, most of which had gone on new schools and hospitals that were desperately needed after years of Tory neglect.

By 2009, however, the bond markets were getting itchy about Britain's public debt, and the government decided to rein it in with a phased austerity programme. Meanwhile, the Tories, who until 2008 had backed Labour's public spending plans, changed their line to attack Labour's supposed gross profligacy, and, strongly supported by most of the press, mounted a no-holds-barred election campaign accusing Labour of criminal incompetence. In the circumstances, given the difficulty of getting non-economists to understand the principles of Keynesian demand management, it's not altogether surprising that the message struck a chord with the voters.

But this much has been obvious since at least early 2009. The question is what Labour can do to rescue the situation and re-establish its reputation for economic competence. Here, the Purple Book is for the most part deeply disappointing. Its authors' preferred solutions – a credible debt reduction strategy, a new emphasis on the non-statist, decentralist, co-operative traditions of British social democracy, a renewed appeal to “aspirational” voters in the south and east – have been widely touted before, and some are appealing. A bigger role for co-ops and mutuals in Britain would be a good thing, and everyone knows that Labour won't win another general election unless it wins seats in relatively affluent parts of the country. (This has been true, incidentally, since the 1920s, but never mind.)

The problem is that none of this really addresses the bigger questions raised by the crisis that has engulfed the world economy since 2008. Is a smaller state really the way to deal with the extraordinary power of the markets, or popular worries about insecurity of employment and about pensions, or sovereign debt in the Eurozone? I'm not convinced. Labour's going to have do a much more profound rethink of what it's about than is on display here.
Posted by Paul Anderson at 22:35 No comments:

Nick Cohen has a blistering piece in the Observer about the impact of Julian Assange's decision to publish unredacted American diplomatic material.


The grass or squealer usually blabs because he wants to settle scores or ingratiate himself with the authorities. Assange represents a new breed, which technology has enabled: the nark as show-off.

Posted by Paul Anderson at 12:24 No comments:

The long-running saga of Johann Hari's dubious journalistic ethics seems to have come to an end of sorts with his public mea culpa in the Independent. He admits that he "improved" his interviews by presenting quotations from his interviewees' writings as words spoken to him; and he admits having used a pseudonym to post vitriolic and untrue Wikipedia entries about his critics and perceived enemies. He says that he has returned the Orwell Prize he was awarded in 2009 and that he will be taking a journalism course to learn what he hadn't previously taken in about how journalists should behave.

The Hari affair is  small potatoes by comparison with other recent scandals of journalistic ethics.

As far as we are aware, his plagiarism was not on the scale of Jayson Blair, whose ripped-off and made-up reporting so damaged the reputation of the New York Times.

Lifting whole sentences (or more) from an interviewee's book or previous interviews and presenting them unattributed as spoken quote is wrong, of course. But no one uses unadulterated verbatim spoken quote for anything written: when did you last see an "um" or an "er" or a "sort-of" or a "like" in a news story except for effect?

Where you draw the line on modifying and improving quotes is, in short, a grey area. Hari went out of the grey and into the black in spectacular fashion, but he's not the first to do so, and he won't be the last. I don't think, one-off, that it's a sackable offence, though if you do it systematically, as Hari appears to have done, it is.

Writing pseudonymous libellous Wikipedia entries about journalistic rivals is a different matter. Anyone can do it, and a couple of morons have done it to me. And if you're found out, it should be out-the-door time, though if you're in the process of a nervous breakdown there are extenuating circumstances that demand that the ejection be humane.

All the same, it's a minor infraction by comparison with the systematic invasion of privacy engaged upon by the News of the World's phone-hackers. I know how Nick Cohen and Cristina Odone feel about Hari's attempts at character assassination, but they're big enough to fight back (as indeed they have done). Nothing Hari has done has endangered anyone's life, and he doesn't seem to have told substantial lies in the interests of governments, corporations or any of the myriad causes he supported.

Which takes us to Hari's punishment or treatment – a year off from the Indy and a course in journalism. I've been teaching journalism for 25 years now, and I think I know what journalism training can do. It can teach you how to write a news story, how to structure a feature, how to lay out a page, how to make a news programme for TV or radio, how to set up a blog, how to do an interview. What it can't do is teach you what is right. Even after the most intensive course on journalism ethics, a plagiarist remains a plagiarist, and I don't know any journalism course that addresses the habit of denigrating one's peers anonymously on Wikipedia. At best, Hari will be made aware of the shades of grey that are everywhere in the business of journalism. He might learn how he should behave, but it won't make him behave any better.

The only way that Hari's doing a journalism course fits the bill is that it's humiliating for him to go back to basics after a decade in the limelight. As rehabilitation, it's useless. As an editor, I would have fired him, end of story.
Posted by Paul Anderson at 14:41 No comments: 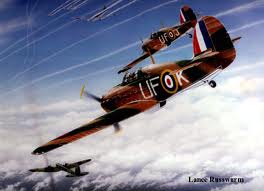 It's Battle of Britain Day, and time to revive this dormant blog. I was only sleeping, honest.
Posted by Paul Anderson at 23:00 No comments: