FIRST THOUGHTS ON THE UKIP EARTHQUAKE

1. UKIP did well, but not that well, in the local elections. Its share of the vote was lower than in 2013. This is partly down to this year’s local elections being in London boroughs, metropolitan districts and (mainly) urban districts and unitary councils – Labour’s heartlands – whereas last year’s were largely in traditionally Tory shire counties. But UKIP’s local gains this year were small except in a handful of places – Basildon, Rotherham and Great Yarmouth stand out. Where Labour made an effort to campaign its vote increased or at least held up. The Tories and even the Lib Dems won where they worked at it. UKIP, despite having oodles of cash from rightwing squillionaires, does not have the members to get out on the doorstep in most of the country.

2. There was a lot of ticket-splitting: many people who voted UKIP in the Euro-elections backed other parties in the local elections. In Ipswich, UKIP topped the poll in the Euros but came a poor third in the locals, in which Labour did very well, and that seems to be a general trend. The local council matters much more to most voters than the European Parliament, and a lot of the UKIP Euro-vote was a casual protest that is unlikely to be repeated in the general election next year (or indeed in local elections).

3. Whether or not Ed Miliband knows how to eat a bacon sarnie, this really wasn’t about him. I don’t think he’s particularly charismatic or a great communicator, but that’s neither here nor there. Labour did well where it went out on the knocker and did the basics on jobs and housing. Local Labour parties concentrated on the local elections: the national Euro-elections campaign was for the most part no more than an added extra. It would be mad for Labour to panic and take a strident anti-immigration position or promise an in-out EU referendum.

4. UKIP’s performance creates more problems for the Tories than it does for Labour. Labour won Tory and Lib Dem seats in the local and European Parliament elections. The Tories lost seats they previously held, many of them in their heartlands in rural southern and eastern England. They might well recover next year, but it’s going to take a lot of work … and in the meantime the Tory right will use the Euro-elections as a stick with which to beat David Cameron, who has very little room for manoeuvre.

5. The Lib Dems are facing meltdown. They have to concentrate all their efforts now on saving a core of MPs … at the same time as supporting the coalition. I’m glad I’m not a Lib Dem.

6. The far left and the BNP are irrelevant. The BNP vote went to UKIP ... and fewer voted TUSC, Respect or No2EU than for the BNP.
Posted by Paul Anderson at 12:36 No comments:

Belatedly – I've been working – many thanks to everyone who helped on the Labour campaign in Bixley ward, Ipswich, where I stood for Labour on Thursday.

I was expecting to lose by a large margin, but I'm pleased to have beaten UKIP into third and the Lib Dem into fourth. I didn't do as well as Elango Elavakalan in 2011, who got 30% on a higher turnout with no UKIP candidate, or John Cook in 2012, who got 29% in a county council by-election on the same boundaries with UKIP standing and a lower turnout. But 566 votes, 24% and second place are in the circumstances – UKIP hype in the media, Euroelections at the same time – consoling. My guess on this turnout is that Labour lost 100 votes to UKIP and the Tories lost 400 ... but the Tories turned out to defeat UKIP.

The other thing is that I've really enjoyed being a candidate. This democracy stuff is reinvigorating, even when a woman with a St George's cross tattoo tells you where to stick your leaflet. Britain loves people who say what they think and put it up for election. Fire the spin-doctors.

Posted by Paul Anderson at 13:58 No comments: 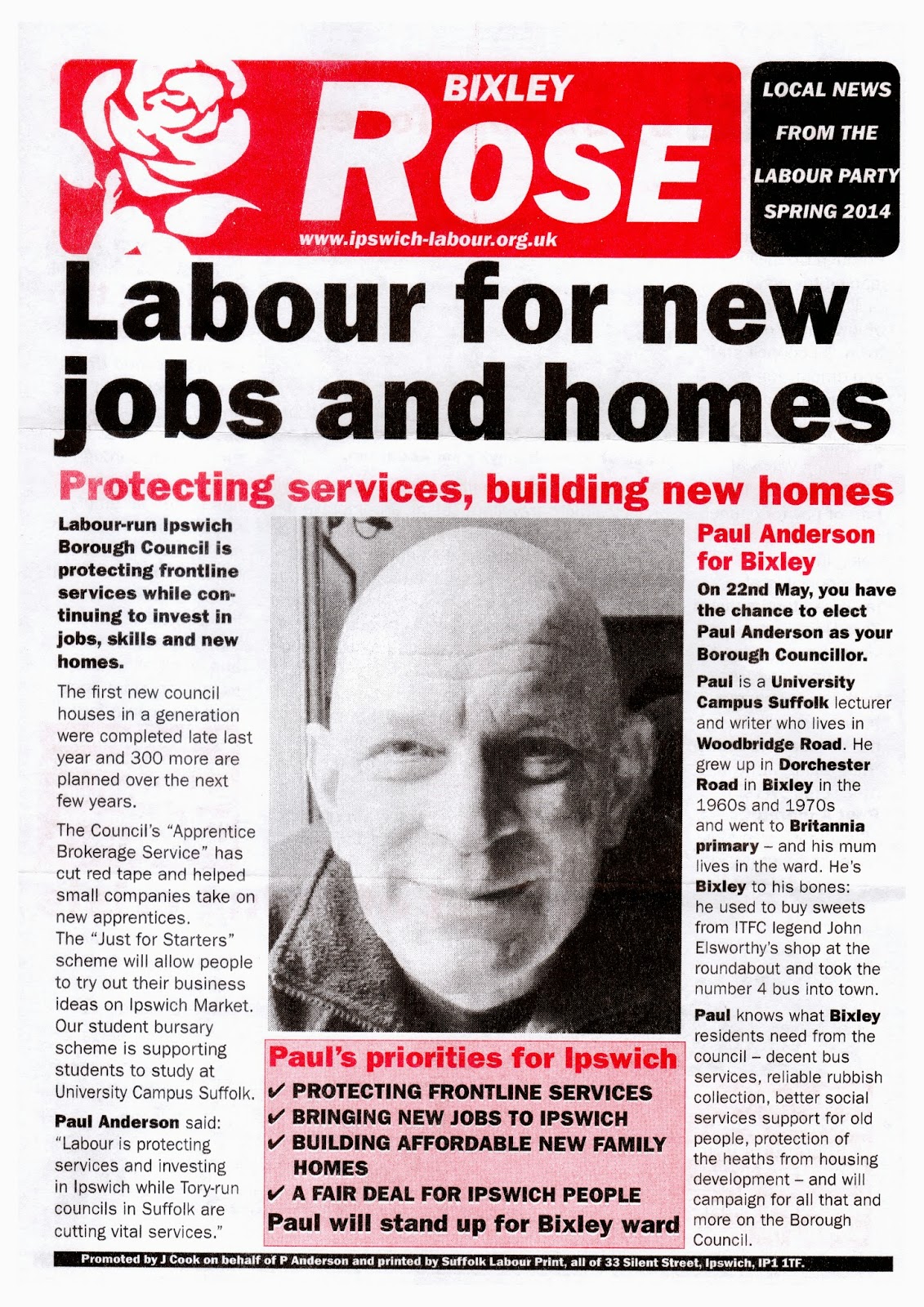 I am a democratic socialist, which means I believe:

Posted by Paul Anderson at 16:49 No comments: