THE MAN WHO GOT IT WRONG

I've no desire to speak ill of the dead, but William Rees-Mogg, who has just died, was the Man Who Got Everything Wrong. He was a great modernising editor of the Times. More than anyone else, he turned it into a modern broadsheet paper between the late 1960s and early 1980s: it stopped being fuddy-duddy and dull and put on circulation.

But after he left the chair, is there anything he got right? His columns in the Independent and later in the Times were fuddy-duddy and dull and became a laughing-stock because of his enthusiasm for ill-informed predictions – Private Eye taunted him as "Mystic Mogg" – but they never went away. He was wrong about everything imaginable, from the state of the world economy and other geopolitical issues right down to the minutiae of arts policy, and was wrong so barmily and systematically that his column became a must-read for anyone with a taste for comedy. We need another chief establishment chump, and we need one now.
Posted by Paul Anderson at 17:01 No comments:

REMEMBER WHAT WE DON'T KNOW

Can you imagine what it's like to be in the bunker with Bashar Al-Assad? I can, but it's not journalism. As his regime crumbles – or does Russian military aid keep it going? – all the user-generated-content new-media palaver shows only that his regime is brutal and cynically prepared to do anything to stay in power. We've got more pictures than we're used to. Some of them are shocking. But are we any better informed about what is actually going than the outside world was in 1917 about the October revolution in Russia? We're not, and technology will never replace journalists on the ground. Where is the correspondent with Assad's ear?
Posted by Paul Anderson at 23:12 No comments:

Aaaargh! Press, a new Brit alternative small press, is celebrating its birth with a party in London next month to mark the publication of its first titles, Reaching for my Gnu by Anna Chen (Kindle e-book and paperback) and The Guitar Geek Dossier by Charles Shaar Murray (Kindle e-book only for now). 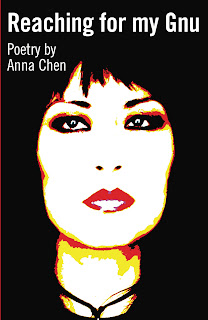 Reaching for my Gnu, a collection of poems by British-Chinese poet and performer Anna Chen is available as a paperback here for £9.99 and as a Kindle e-book here for £1.99.

'Brilliant and dangerous ... one wild-ride roller-coaster that soars to altitudes of unfettered wit and then plunges with a startling and implacably knowing anger' MICK FARREN 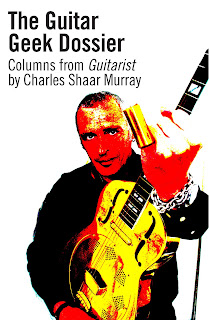 The Guitar Geek Dossier, an author's-choice collection of columns from Guitarist by legendary music journalist Charles Shaar Murray is available as a Kindle e-book here for £1.99.

Charles is author of Crosstown Traffic: Jimi Hendrix And Post-war Pop and Boogie Man: The Adventures of John Lee Hooker in the American Twentieth Century (both Canongate). His first novel, The Helhound Sample, was published by Head Press in 2011.

The details of the launch party, which will be something to remember, will be posted here and on the official Aaaargh! Press website very soon.
Posted by Paul Anderson at 00:14 No comments:

A few points to add to what has already been said elsewhere:

Posted by Paul Anderson at 01:35 No comments: